Meet the experienced and friendly doctors and staff who make In Focus Eyecare of Rockford the leading provider of vision care products and services in Rockford. 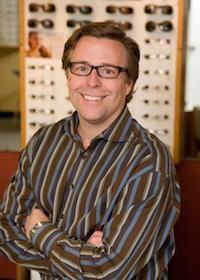 Dr. Swan has been the eye doctor at this location since 2005, when it was called Rockford Vision Services. In 2010, Dr. Swan purchased the practice and renamed it In Focus Eyecare of Rockford. As an optometrist/owner he has been able to expand the eye care services that can be provided to patients and is now able to participate in several health insurance panels and vision plans.

Dr. Swan is also a professor at the Michigan College of Optometry, located at Ferris State University in Big Rapids, Mich., where he teaches pediatric and binocular vision in courses and clinics. He is also the Chief of the Optometry Service at Mercy Health – Saint Mary’s Campus in Grand Rapids, Mich.

Dr. Swan has served the profession of optometry at the national level having been appointed to several volunteer and leadership positions in the American Optometric Association including the Aviation Vision Committee, Health Information Technology and Telemedicine Project Team, Faculty Relations Committee, InfantSEE state coordinator and the Research and Information Executive Committee. He has also served on the Accreditation Council on Optometric Education and with the Association of Schools and College of Optometry; Binocular Vision and Informatics special interest groups and the Association of Contact Lens Educators.

Dr. Swan earned his doctorate degree in optometry at the Michigan College of Optometry at Ferris State University. He also earned a master’s degree in reading disabilities at the University of California at Berkeley School of Education. Additionally, Dr. Swan is a fellow of the American Academy of Optometry (AAO).

Dr. Ullrey provides comprehensive vision care for our patients at In Focus Eyecare. Dr. Ullrey has been working at In Focus Eyecare since the summer of 2013 in many different capacities and has just recently joined us as a doctor of optometry. He is accepting new patients as well as providing more appointment options for our established patients.

Dr. Ullrey graduated from Michigan College of Optometry and completed a residency in Ocular Disease at the Wyoming VA Community Based Outpatient Clinic.

In his free time, Dr. Ullrey enjoys spending time with his wife and young daughter. Dr. Ullrey looks forward to meeting and helping to take care of all In Focus patients!

You can schedule your next appointment with us online!